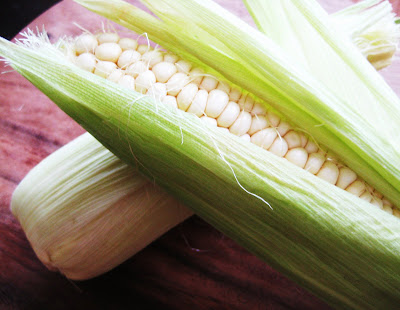 When you marry a southern guy, you’d better learn to love the following: fried foods, BBQ, bourbon, Willie, Waylon, and Johnny. I pretty much had the music part covered, and I thought that I had experienced my fair share of eclectic cuisines until I ventured down south, where I was first introduced to foods like barbecue spaghetti, fried pickles, sausage balls, and every casserole and cobbler under the sun. When we went to Nashville for Thanksgiving last year, our good family friend, David, brought over bourbon corn pudding, another southern food with which I had yet to be acquainted. That corn pudding was straight up addictive – it may as well have been called crack pudding! I can’t even remember if I ate any turkey or stuffing, but I certainly put a major dent in David’s bourbon corn pudding. I'm a little ashamed to admit that I went back for more and had it for breakfast the following morning. It was like crack, I tell you!

Corn and bourbon make for an amazing combination, as I found out after devouring David’s amazing Thanksgiving contribution. Also, one of my all time favorite not-so-healthy-food pairings is caramel corn with a glass of Woodford Reserve (as seen here). By taking cues from both of these tasty dishes, I came up with the idea to make bourbon-spiked corn cakes. The golden browned texture mixed with the natural sweetness of the corn and bourbon make a delicious treat that can be served either savory or sweet. To complement the southern theme, I served my bourbon-spiked corn cakes alongside barbecued pulled pork, but they would also be great with ribs, chicken, or seafood. If you’re feeling adventurous, enjoy these corn cakes with some maple syrup to make one hearty breakfast, although, some may frown upon having bourbon first thing in the morning. Bourbon – it’s what’s for breakfast. Something tells me that Willie, Waylon, and Johnny would definitely be at that breakfast table...along with David and me! 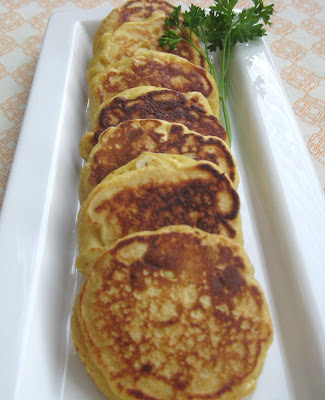 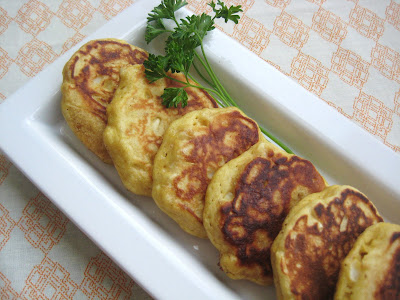 In a bowl, combine the flours, baking powder, and salt. Whisk together egg, milk, bourbon, and honey in a separate bowl. Pour wet ingredients into dry and stir until well combined. Cut the corn from the cob and mix into the batter. The corn can be blanched or sautéed before adding it to the batter, but I didn’t feel the need.

Similar to making pancakes, heat a pan or griddle on medium heat and then brush with butter or spray with cooking spray. Spoon some batter onto the hot surface, aiming to make cakes about 3 inches in diameter. You can of course make larger cakes if you want. The batter does not bubble as much as regular pancake batter does, so keep an eye out for when the cakes need to be turned (Mine took about 2 minutes to brown). When the edges and underneath appear to be cooked, turn the cakes and continue to cook for another 2 minutes or so.

Again, if you wish to make the cakes sweeter, add more honey. If you want them to be more savory, add more salt. Either way, these bourbon-spiked corn cakes are delicious. Enjoy! 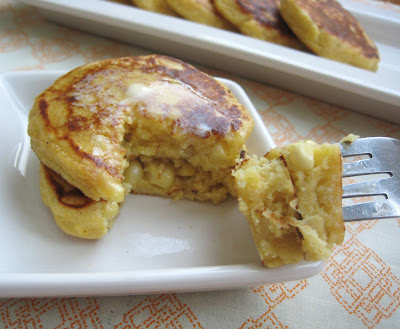 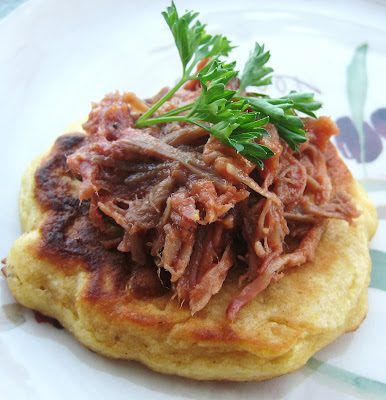 I'll be fixin' the bourbon-spiked corn cakes Saturday morning (unless I can figure a way to take a mental health day and stay home Friday). Y'll come.

Yay David! Something tells me that you are going to love these! Thanks for the idea!

I'm going to use some grilled corn I fixed earlier in the week. Will let you know how it goes.

Saturday morning. Dateline Memphis. The roasted corn was wonderful (IMHO), but I love anything with roasted corn. The sweet zing from the bourbon was great, and the texture with the corn meal added a lot. My corn cakes would have probably been better had a read the recipe more closely and added 1/2 C of milk instead of 1 C. So I added a bit more flour. The good thing is that I ate the first eight and saved the second eight for tomorrow morning. Thanks for the recipe. And I think I can still drive to get my three hairs cut this morning.

Love this flavor combo. Will definitely have to give it a try. The bourbon definitely makes me think more of brunch or a lunch side dish than breakfast.