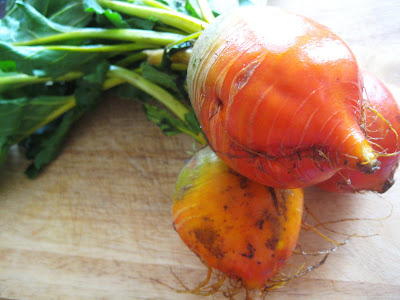 I didn’t start my love affair with beets until I got married. Thomas, being part Russian, once requested that I make borscht. Borscht? What’s borscht? After a lot of Googling, long consultation with my mother-in-law, and a trip to St. Petersburg (for fun, not necessarily for borscht research), I learned that borscht is a hearty, Eastern European, beet-based soup. I also learned that the process of making an authentic borscht is not only incredibly labor intensive, but it also turns everything in my kitchen red, bright red – including me. 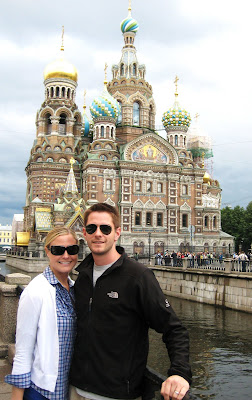 Ever since my first batch of borscht, I have been making multiple variations of it by the gallon, and I have been roasting beets by the bushel. I just can’t eat enough of these colorful root veggies! My all-time favorite beet dish, arugula salad with roasted beets and goat cheese, was recently upstaged by my new favorite, baked beet chips. In an attempt to marry my old to new favorite, I made a beet chip-encrusted goat cheese salad, using golden beets instead of red ones. This delicious dish puts a modern spin on an old classic. Although it is much simpler to prepare than borscht, it still managed to turn everything in my kitchen yellow, bright yellow – including me. 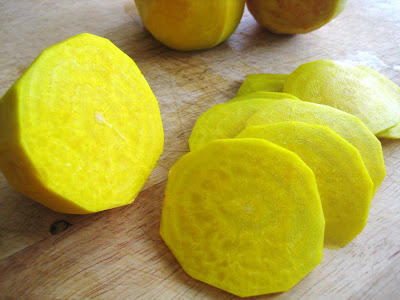 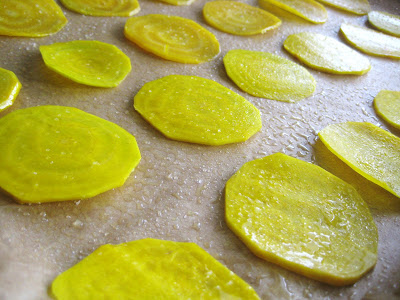 Preheat the oven to 325 degrees.

Wash and peel the beets. Very thinly slice beets using a sharp knife or a mandolin. Try to make the slices uniform so that they cook evenly.

Bake for 15 minutes, turn, and bake for another 15 minutes or so. Check on the beets occasionally as the thickness of the slices will require a slightly different cooking time. Once browned and crisp (some may brown quicker than others), remove the slices and allow to cool and drain on a paper towel. 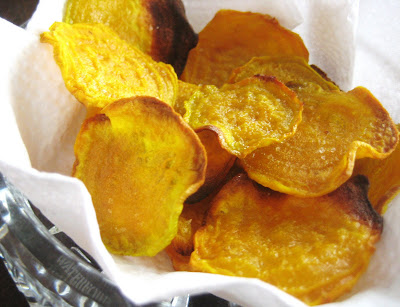 Cut goat cheese into 1 inch slices and pat down to keep compact and circular. Press slices into crushed beet chip pieces to cover. Place over dressed arugula and pistachios.

I served mine with a blood orange vinaigrette, but any basic vinaigrette will work. For my dressing, I whisked together blood orange juice, white wine vinegar, chopped shallot, grain mustard, and olive oil. 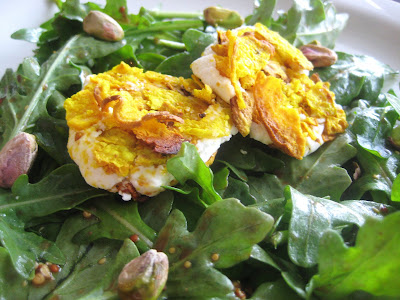 Just made these today. They totally are my new kale chip replacements!

Looks incredibly tasty. I want to make this, but layer the goat cheese in between the chips.